I don’t remember much from college classes over 40 years ago, but I have a vivid memory from art history class that has come back to me lately.

A painter named Michelangelo Merisi da Caravaggio was commissioned to paint a depiction of St. Matthew for a wealthy cardinal’s burial chapel. His first attempt showed a simple man being patiently helped along by an angel. The picture was not well received, as it made St. Matthew look too much like an ordinary person! 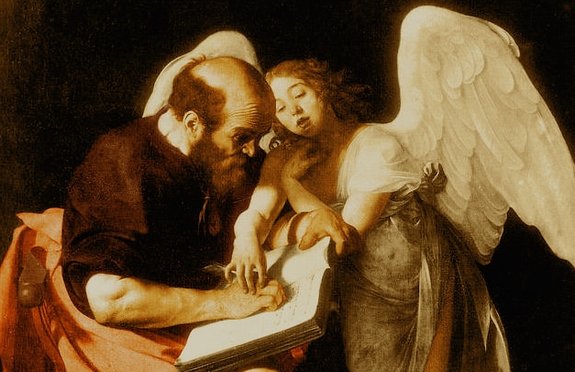 The artist’s second attempt was deemed more acceptable, with the saint looking nobler and the dictation of the gospel more dramatic and supernatural looking.

Although I liked both pictures, I remember thinking even back then that it was a shame to discard the picture of an ordinary man fulfilling an extraordinary task, as that is more the way most of us experience divine help.

As a believer for more than half a century, I have found times of supernatural events – bending or breaking of natural laws, dreams, visions, voices – have been very few and far between. Far more common in my life have been “coincidences” – those “What-are-the-odds-?” moments that never fail to delight me. If I were to have daily visions or hear God’s voice “coming out of nowhere” with unusual frequency, I’m guessing I would be deemed mentally unstable and relocated someplace where I couldn’t hurt myself or others.

Was it even likely the gospel writers took dictation directly from an angel? Possibly. God can do whatever He wants. But most of the stories told in the gospels are of events that happened with one or more of the disciples present, or others such as the woman at the well (John 4) who were likely to tell the writer what had happened. The gospel writers were merely writing down what they had seen and heard.

Still, as I’ve been reading the book of Matthew, a few of the details have caused me to wonder, “Wait a minute… How did he know that?”

I have been trying to imagine how each of the gospel writers might have gained the information they are telling, assuming that it was all by natural means. Of course, God can do miracles any time He wants to, but He is also very skilled at using people and things that “just happened to be” in a certain place and time.

In Matthew’s gospel we are told about Herod the tetrarch, who ruled over Galilee during the time of Jesus. Herod had stolen his brother’s wife, and when John the Baptist confronted him with his sin, John was imprisoned and later beheaded.

In Matthew 14, we are told that when Herod heard the reports about Jesus, “he said to his attendants, ‘This is John the Baptist; he has risen from the dead!’ ” (Matthew 14:1-2)

How did Matthew know this?

Our pastor said something last Sunday while preaching from the gospel of John that might help answer my question.

In John 4:46-54, Jesus had come from Judah to Galilee. A “royal official” came to Him and begged Him to heal his child, who was close to death. Our pastor reminded us that in Galilee a “royal” official would have worked under Herod.

Was it this official who told Herod about Jesus’ miracles?

Jumping over to the gospel of Luke, we find a list of the names of women who followed Jesus and supported Him financially. Among these women was Joanna, “the wife of Cuza, the manager of Herod’s household.”

How did the wife of Herod’s household manager end up following Jesus?

We might note that Herod, although a Jew, was a sort of puppet king put in place by the Roman government. The Jews of the day despised him, considering him a traitor.

But wait – weren’t there other people the Jews despised and considered traitors? – Oh yeah, the tax collectors. But Jesus actually chose a tax collector to be one of His disciples…

We don’t know how long Matthew had been a tax collector before Jesus called him to be His disciple, but it seems likely he had connections with Rome, maybe even knew some of his fellow “traitors” who were part of the palace staff. Perhaps Matthew had told the royal official about Jesus’ miraculous healings, encouraging him to come to Jesus when his child was sick. Perhaps this “royal official” was Cuza, and his wife Joanna was so grateful for the healing of their son that she became a follower of Jesus.

“For God so loved the world that he gave his one and only Son, that whoever believes in him shall not perish but have eternal life.”  (John 3:16)

That’s “whoever.” Whatever our race, nationality, situation, or time in history when we were born – none of it is a mistake. You are part of God’s strategy! Who are you in a unique position to tell the Good News? You might be the only one who can reach that person. Don’t wait for a vison, a voice or an angel – just keep your eyes open for that “divine appointment.” And when you see it, go for it.

Prayer: Lord, thank You for calling ordinary people like me to spread Your Good News. Help me not to compare myself to others, but to see how You can use me. Here. Now. Thank You for giving me everything I need to fulfill today’s assignment. I’m excited to serve You! In Jesus’ name, Amen.

I am a forgiven sinner and adopted child of God, seeking to see life from His perspective - as opposed to the world's flawed perspective - and living my life accordingly. View all posts by seekingdivineperspective